Sunday Feb 23 Newport UWH hosted a 3 hour clinic. There were 16 people in attendance from beginners to experts. Thanks to everyone who organized it and who participated!
Following the clinic was a pizza eatin’ and glove makin’ hoot-n-nanny at Joe’s. Congratulations to the first time glove makers!

OR was representing this year at the Colorado Battle @ Altitude in January.
OR players Kevin, Justin, Gary, and Lars (sorry if I missed anyone) joined efforts with Phoenix players, including ex OR player Brian Miller.

Chris Jolie took us through defensive, neutral and offensive pool zones as well as the basic strategies used for playing in each. If you missed out on the awesome, detailed packet he organized for us, download your copy here!

In addition to learning about the playing field, participants were able to cycle through several individual skill stations including, curling drills, stick handling drills and shooting obstacles. then we broke into (2) teams playing several scrimmage games that put all the new information to immediate test in real game situations.

The evening was topped off at Josh’s home with a delicious potluck and brainstorm session for Team Oregon 2015!

Great work everyone. I really look forward to perfecting my skills with you each week!
Kim 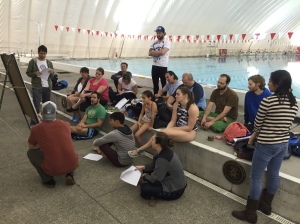 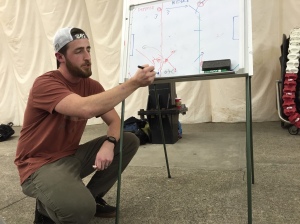 To save time that morning, if you plan to attend, please pre-register with the following info:

Name:
City, Prov or state:
Email address:
Offense or Defense:
Skill Level:
>Novice:  (one year or less)
>Intermed:  (playing for more than one year; or Experienced but joints no longer working as well)
>Experienced:  (played in national or international competition)
>Expert:  (played in national or international competition in the last 3 years)
Age Group:
>Junior: U19;
>Senior: Over 60

Let me know if you need directions, accommodation or have any other questions.

Check out the 4th USAUWH Newsletter!

Hosted By: Chris Jolie
When: Saturday December 13th: 1pm-5pm
Where: Mount Hood Community College Aquatic Facility
Cost: $20.00 each (Hand your money to Kim Skukas in person or send paypal (no fees) to kskukas@gmail.com)

The Clinic will be split into (3) major activities. Starting with dry-land discussion, followed by skills and drills practice and finished with scrimmage play. Jolie is currently a Bend, OR resident and experienced hockey player from the East Coast. In fact, his parents met at a tournament in the 80’s… so you could say UWH is the reason he exists! The clinic is for everyone… No player is too “good” for skills practice or too new to try. There will be information for all to take away to help your game at practice or the next tournament!

PARTY immediately following at Josh’s place: It will be a potluck fish-fry (Josh will provide fish). BYOB and a dish to share! Crash space is available at local homes, please let Kim know if you need a Portland area place to sleep on Saturday night.

Hello all!
Your Team Oregon competed at the Pacific Coast Championship (PCC’s) in not-so-sunny Las Vegas last weekend.  After some excitement with thunderstorms resulting in pool evacuation, the tournament took off to a bumpy start.
We entered the highest divisional level of play “Elite” and were thoroughly beaten in Saturday’s games… it was a complete shut-out.  However, our moral remained high and we were able pick up skills as the day wore on.  Then with the arrival of Mark Swick on Sunday, we rallied to score several goals and ultimately tied two games.  Our final standing was 6th out of 7 teams in our division.  1st place was taken by the club Aletas, flying to PCC’s all the way from Medellin, Colombia!
The Oregon line-up:
back line – Chris Jolie, Michael Riccitelli, Joseph Danna and Mark Swick
forward line – Kim Skukas, Loren Mueller, Jim Erjavac, Josh Humbert, Cate Mitchell, Bill Letsom
A good time was had by all and if we keep up the training, Team Oregon will one day win the Elite division!
Excited for the next one,
Kim! 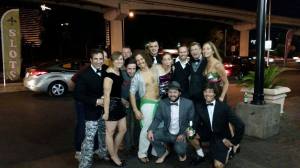 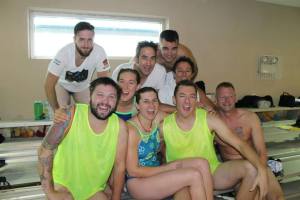 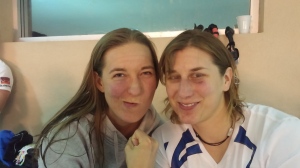 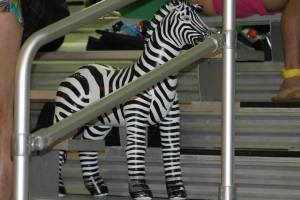 The tournament lasted 3 hours and we played a new team setup: Each player was assigned to a Pod of 3 players. These pods were combined every game to create teams of 6 players and a round robin was coordinated between the team combinations. Each pod received 3 points for a game won, 2 for a tie and zero for a loss.

The winning Pod was: The “J-Team” Jorge, Jasmin and Jim. Congratulations J-Team!

Join us next year for a great day of hockey! 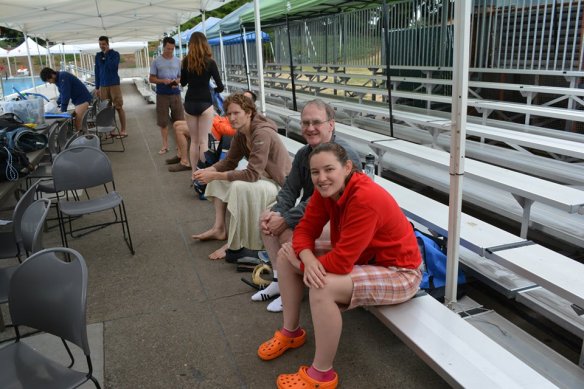 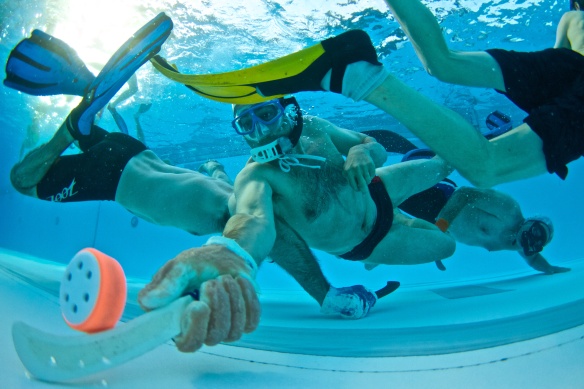 We are proud to announce Team Oregon finished 2nd place in the B division.

We played a 3-3 formation and stuck with it all tournament. We have been training very hard to control the movement of the game: Choosing when to contain the threat from our opponents vs. when to open up the playing field through swings and drives. It was this ability paired with our hard-earned fitness that allowed us to beat teams with so many different styles of play.

The highlight of the weekend was our upset against the 3rd seed Chicago team on Sunday morning. We beat them 3-1 to qualify for the finals game after loosing to that same team 4-0 in the round robin games on Friday.

PCC’s is just around the corner…. Will you join team Oregon?

Never get in an elevator with an UWH team!

‘Yes Swick Daddy’, but please save our arses… again!

Rockin’ out in short-shorts!